Above the roof of Villiera’s tasting room is a cluster of demijohns filled with a liquid the colour of café au lait. The contents catch the light intermittently as the sun chases the clouds above, filtering down through the surrounding oaks. Cellarmaster Jeff Grier has colloquially called the rooftop assortment “dakwijn” which translates into ‘roof wine’

“It’s an idea that comes out of the Roussillon where Domaine Grier is situated,” Grier explains. The family also owns a small vineyard in the South of France.

“For the dakwijn we used chenin blanc, picked ripe and it was partially fermented before fortifying, leaving some residual sugar. To add to complexity and interest it was placed in jars on the tasting room roof for eight months. There it was madeirised in the sun and allowed to partially oxidise under a light flor veil. 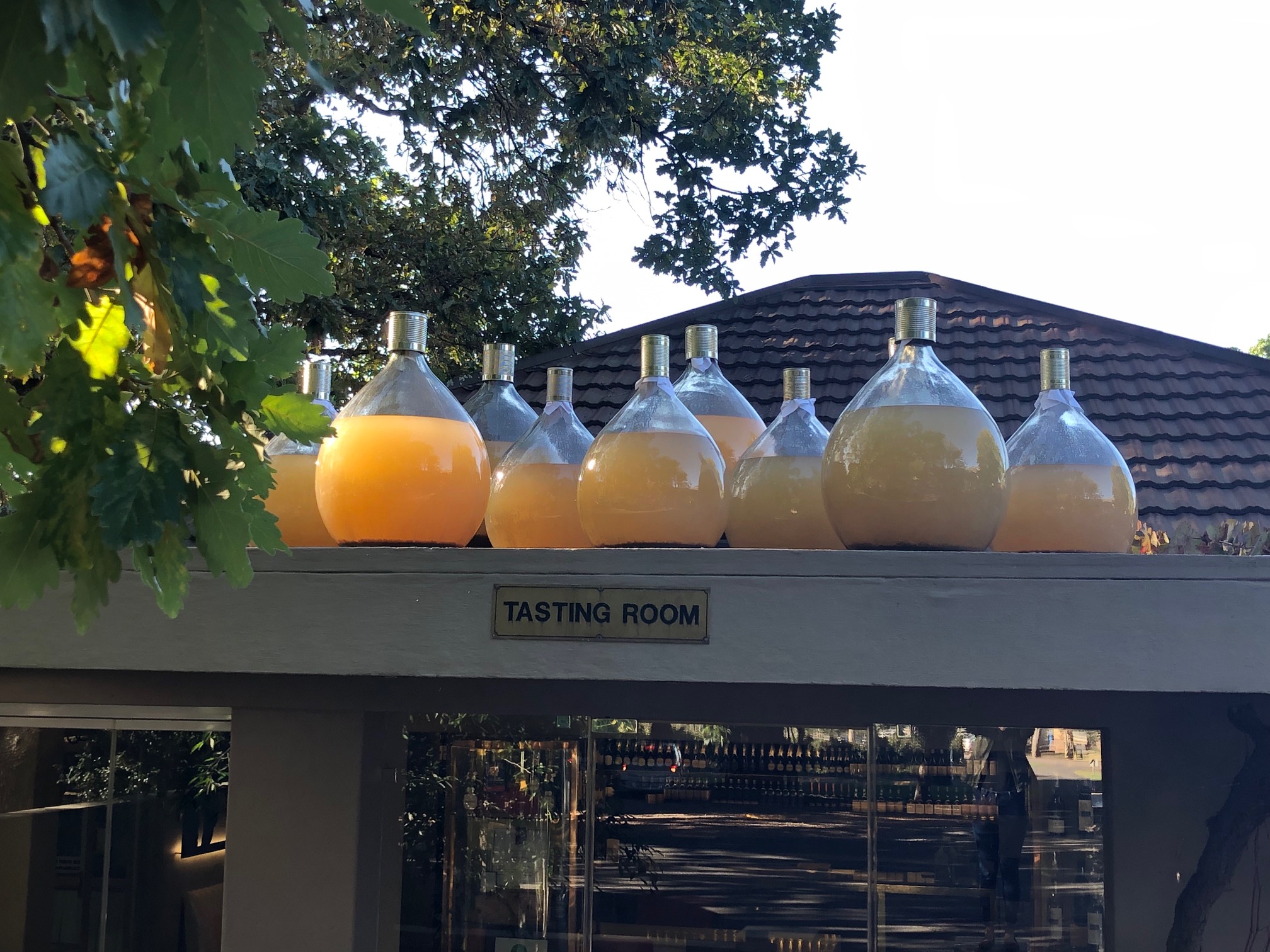 “After enough time in the jars it was placed in used barrels for a year and a half to settle. It will be bottled this week, the first vintage is 2017, and it has a nutty, savoury character with hints of caramel and spice.”

Grier is no stranger to innovation. He’s a founding member of Cap Classique Producers Association, and from the get-go has been thoroughly entrenched in the vanguard of the category, producing many firsts—and many resulting awards. He has been named the Platter’s Wine Man of the Year as well as the Diners Club Wine Maker of the Year and has been crowned Winner of the Chenin Blanc Challenge, among many other accolades. He is also a member of the illustrious Cape Winemaker’s Guild.

On the personal front he’s been married to his wife, Lynne for 36 years. They have two children, Matthew and Kim. He’s also an enthusiastic golfer, loves eating out and enjoys the occasional trip into the bush.

To describe his winemaking style he says: “I believe in natural wines supported by technology and underpinned by creativity.”

And to think, all that talent could have been given over to another kind of farming entirely. For a man who puts stars in bottles, winemaking initially wasn’t in the stars for him.

Grier sits across from me in the courtyard of his Stellenbosch estate, glasses of Villiera MCC between us.

“We were chicken farmers,” he says simply. His late father Robin was instrumental in developing County Fair Chickens.

After school he went off to Stellenbosch University with the idea of studying poultry science to join the family business. But he soon found himself drawn to the alchemical world of winemaking, and promptly changed subjects. A move that would set his entire family business on an all-together different course.

“A chicken tasting is not quite as fun as a wine tasting,” he says smiling.

It wasn’t too much of a stretch.  The Griers (there are also two sisters) had been brought up in a household that celebrated food and wine. His father had studied at the Ecole Hôtelière de Lausanne in Switzerland and spoke fluent French. He worked in hotels all over the world, including in South Africa, before setting up the poultry farm in Constantia.

“We were brought up with wine at the dinner table.”

Once a qualified winemaker, his first job was at (the then) Distiller’s Corporation, where he was tasked with filtering and stabilisation.

He had itchy feet. “I wanted to go overseas.”

He reached out the late Spatz Sperling of Delheim, who arranged a job for him in a German laboratory, work that he coupled with a harvest on a small estate on the Rhine.

When it was time to come home, there was a job waiting for him at Delheim.

“Spatz trusted me, supported me and gave me projects at a young age. He also gave me critical feedback, which forced improvement and growth,” he says of his mentor.

There the job of winemaker turned into a vocation: “That’s where I really fell in love with wine.”

It was also at Delheim where discovered one of his greatest friends, head winemaker, Kevin Arnold. “Kevin is one of the most diligent, hardworking winemakers I know and he taught me perseverance and commitment. Today we’re still great friends.”

After a few years, in 1983, Villiera came on the market, and it was time for the family to officially change lanes. 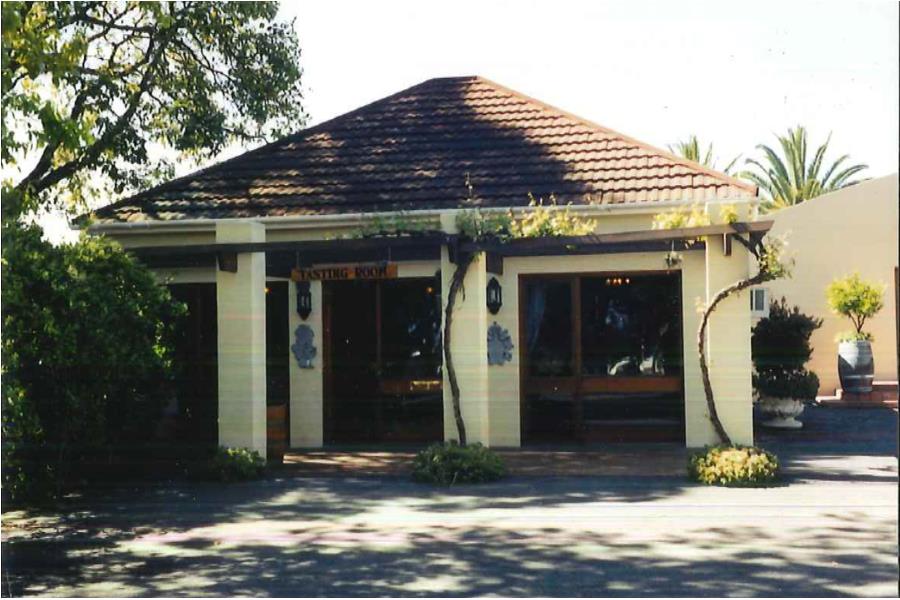 Patriarch, Robin along with his brother Alexander purchased the farm. Jeff came on as winemaker—a role he’s relished for three decades now—while cousin Simon came on as viticulturist and his sister Brewer (née Grier) took the role of sales and marketing. And what a team they proved to be. 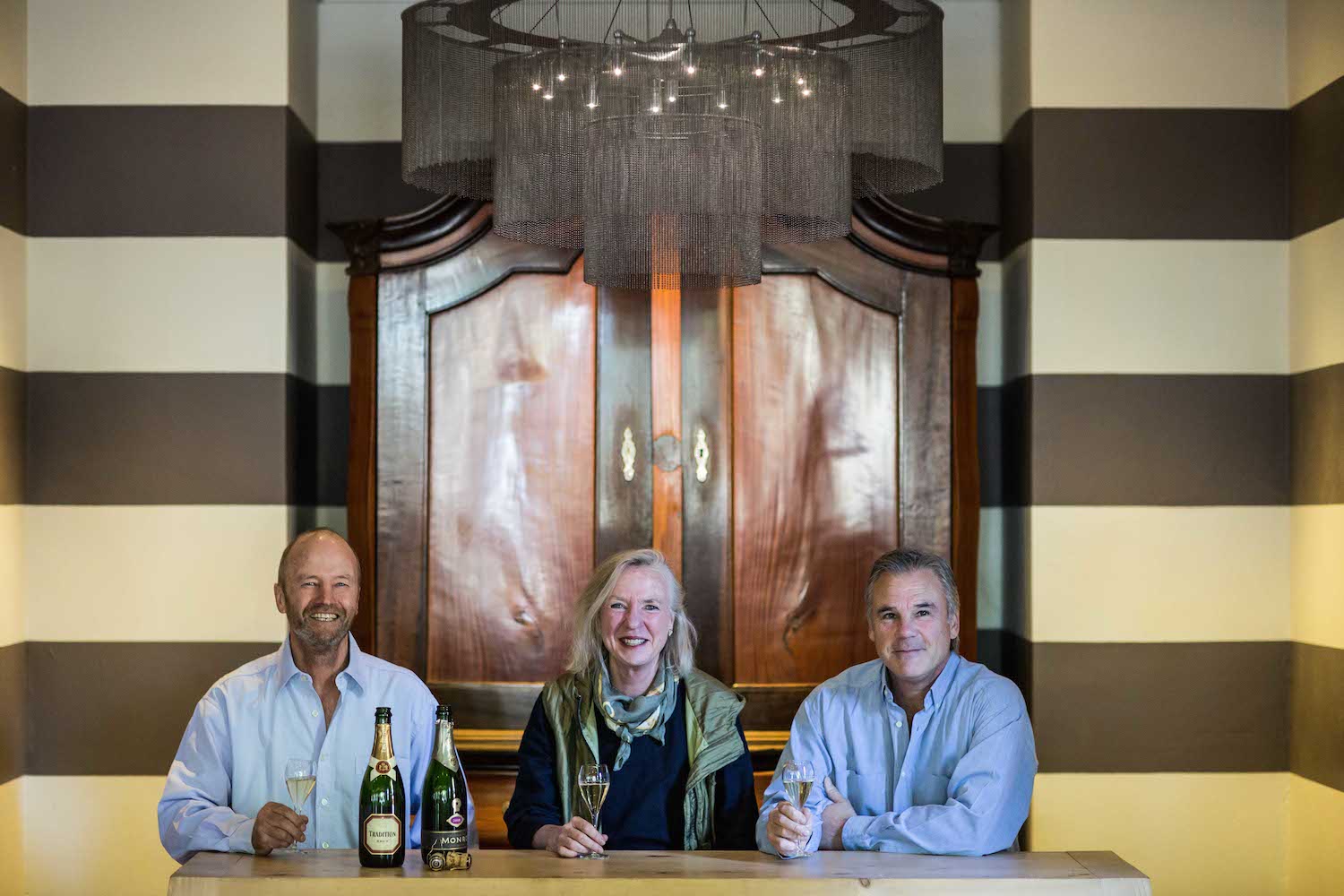 Their innovative approach to not only winemaking but also to the wine business has seen Villiera become one the most successful private wineries in the country.

Part of this success says Grier is a sense of responsibility towards both the environment as well as the community around them.

“If you don’t look after your environment and social issues; you’re not going to make progress—either as a society or as a business. We simply subscribe to the philosophy of ‘doing the right thing’.”

On the social side, Pebbles Projects has their headquarters on the farm, the aim of the organisation is to educate and enrich the lives of disadvantaged children and families in the winelands farming communities. Early childhood development is provided to over 30 children of Villiera farm workers.

This together with the Owethu Clinic and Early Childhood Development Centre and After-School Club has earned them WIETA Accreditation and BBBEE (Broad Based Black Economic Empowerment) certification.

Villiera also has their own tertiary education fund for the children on the farm. “We’ve helped a lot of people go through university,” smiles Grier.

One graduate in particular stands out. “He achieved a BSc degree, with the plan to initially become a winemaker, he did his practical in our cellar—but he’s now a banker—which if you think about it is the quickest way to become a wine farmer,” says Grier laughing.

“We never commit anyone that goes through our fund to working for us, that’s not the goal. It’s about creating a sustainable community around you.”

They put just as much into the land as they do the people. The estate has been insecticide free since 2000, using natural predation—ducks and owls—to eliminate crop-destroying bugs.

In 2009 Villiera set aside 220ha of land as a wildlife sanctuary home to endangered birds as well as mammals such as springbuck, kudu, giraffe, bontebok, eland, gemsbok, black wildebeest, bush pig, Burchell’s zebra, common duiker, steenbuck, waterbuck and grysbok. Over 100 000 indigenous trees have been planted.

The winery also has South Africa’s single largest solar roof panel system as well as a state of the art system for rainwater harvesting and water recycling.

Not to mention they have one of the longest histories of producing Cap Classique (nearby Simonsig claims first place).

“When we first arrived here I knew we couldn’t just make cabernet, merlot and shiraz like everyone else. We had to come up with some point of difference.” 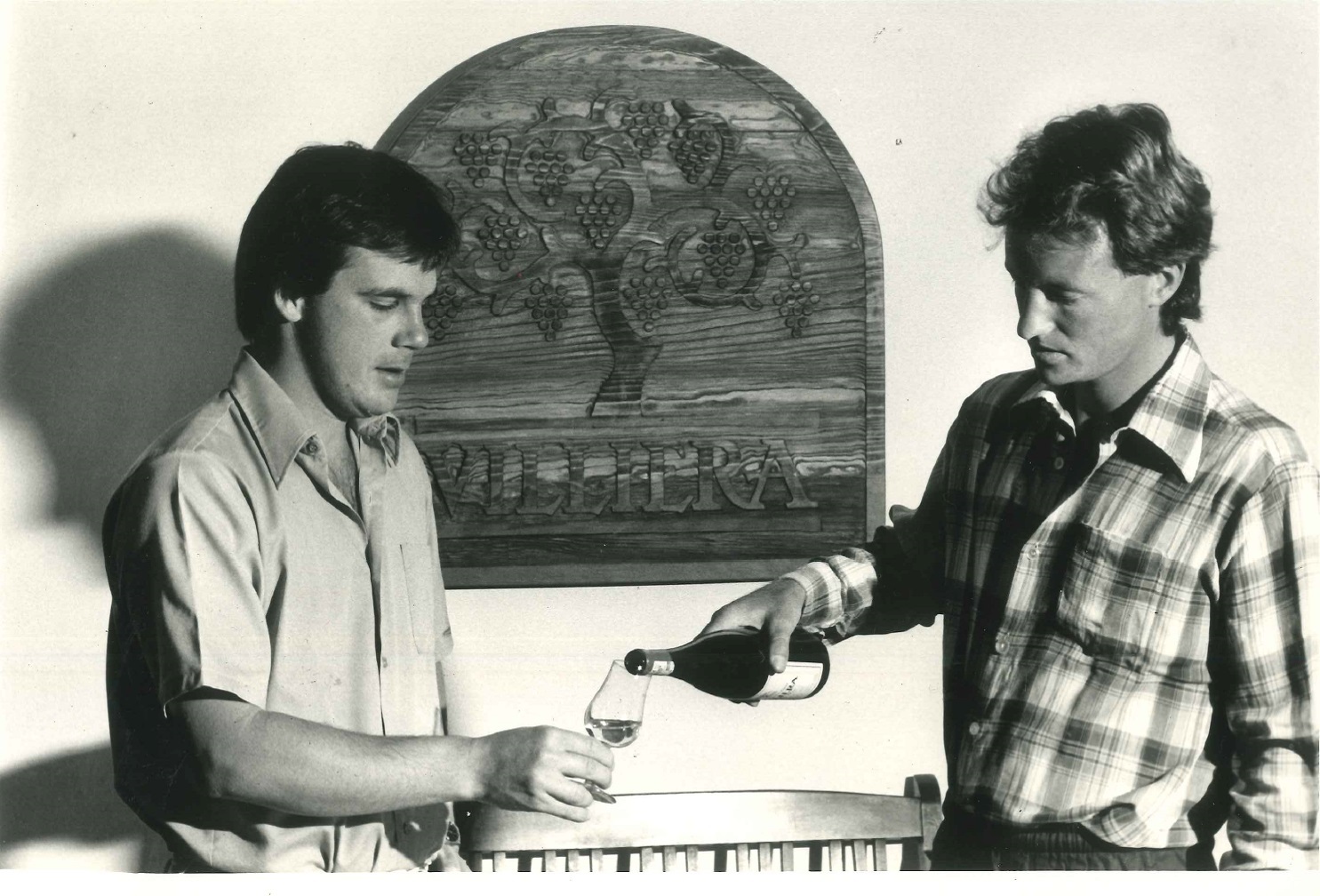 Jeff and Simon in their 20’s

Serendipity struck when he met Frenchman and champagne producer Jean Louis Denois towards the end of 1983. Denois was in the Cape to explore the idea of bottle-fermented sparkling wines on our soils. Grier and Denois met, then sat for two hours talking and drinking wine—at the end of that meeting they had agreed on a partnership, one that was to last a decade.

The first Villiera Tradition was released in 1984. Villiera was then the first to produce a rosè as well as a Brut Zero in the MCC category.

The Monro Brut MCC—the country’s first a prestige cuvée—has brought the farm the most acclaim, winning countless accolades. (Monro is a family name; each son of the Grier clan carries it as a second name).

Most recently the Villiera Monro Brut 2012 was awarded a Gold Outstanding at the prestigious International Wine & Spirit Competition (IWSC).”

“To receive a trophy like that…” says Grier, clearly moved for a moment. “But winemaking is not all about awards. What I really love is when a winemaker friend, sends me a photo a Villiera wine they’re enjoying.” 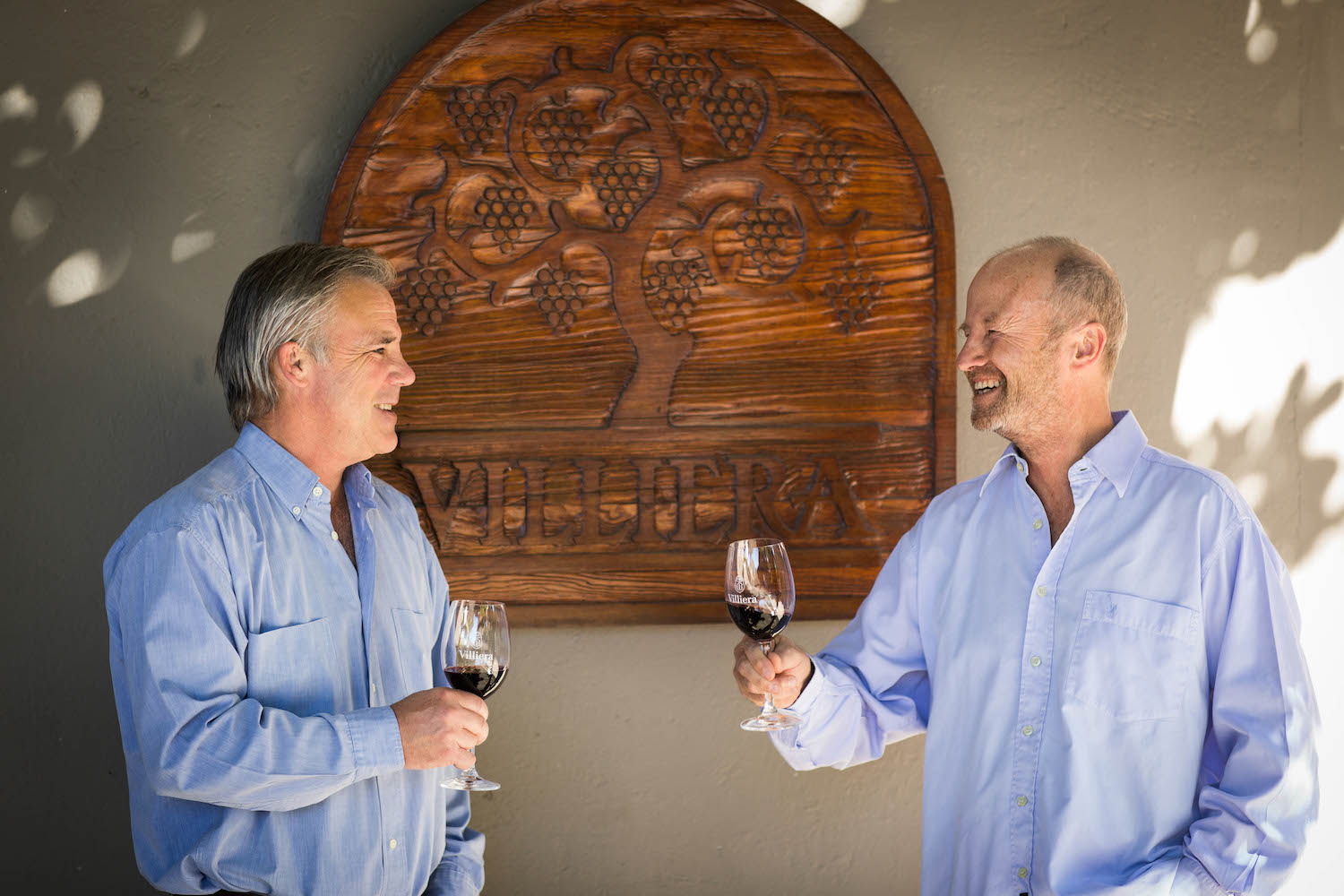 MCC currently counts for around half of Villiera’s production. Muses Grier:

“We now have to make a decision—are we going to go for the next level of production and expand the bubbly side?”

The next generation winemaker is already in the cellar (since 2017), Xander Grier (son of David Grier, Jeff’s cousin), and it’s on his shoulders that these bubbles will rise.

Speaking of the next generation, does Grier have any words of wisdom for today’s young winemakers as a whole?

“They need to be passionate, understand the product in depth, be conscientious and reliable, develop sound relationships with suppliers, colleagues and staff.

“Above all they need to earn respect from their community and their industry.”